Egypt’s Constitution: The Narrative of Counter-Revolution 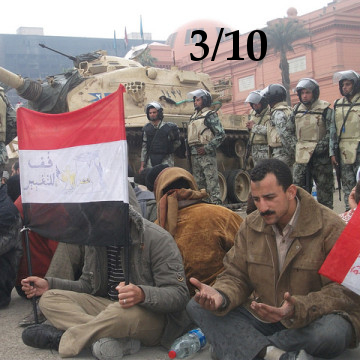 Egypt’s Constitution: The Narrative of Counter-Revolution

Was Secretary of State John Kerry right to remark, last July, that the Egyptian military’s coup d’état was “restoring democracy”?[1] Perhaps not, if his sobered response to Egypt’s recent constitutional referendum is any indication.[2] On one hand, a spectacular 98.1 percent of voters lent their assent this January to the regime’s new constitution.[3] But on the other hand, virtual unanimity is not so impressive when policemen hound the evening streets of Cairo to arrest those who dare to hang posters saying “No to the Constitution.”[4]

For a country whose revolution was so thrillingly modern,[5]the counter-revolution has been a dreary affair. Aside from the expected and customarily grisly sprees of violence, the modus operandi of the now-ascendant military regime has been to restore, under the pretense of legal legitimacy, the hallmarks of the status quo.[6] Ensconced in the military’s imposed legitimacy, other government branches have further silenced the not-so-loyal opposition—the Islamist Muslim Brotherhood—by labeling them a terrorist organization.[7] And it is at the mercy of the judiciary that Brotherhood-backed ex-president Muhammad Morsi now kneels, toppled last year by a military putsch to stand trial for “insulting the judiciary.”[8] Liberal theorists often strain to analyze law distinctly from power;[9] in Egypt, it is hard to think of the new constitution as anything but Old Power, codified, with the judiciary and legislative branches serving merely as its agents.

It is rather telling, then, that the new constitution opens with reference to “the beginning of history.”[10] At the outset, the constitution declares its commitment to the old; this potential symbol of change has devolved into merely the latest prop in the repertoire of counter-revolution. Admittedly, the archetypal instance of non-revolutions is none other than the American Revolution.[11] Charges of American imperialism are as old as the nation itself—which is not a trivial accusation for a state premised on the repudiation of empire. W.E.B. Du Bois once said, for example, that American blacks occupied “in their economic and political condition a distinctly colonial status;”[12] and race is only the most obvious and pernicious blemish of post-revolutionary America.[13] With property relations and social hierarchy as the benchmarks, the colonial uprising’s ideals seem woefully distant.

Still, if the American revolutionaries can boast of any achievement worthy of the name, it would have to be theoretical. Philosophically, the Revolution heralded the concept of sovereignty vested in the people, and the Founders framed a constitutional structure that sought painstakingly to instantiate that concept, even if it took years for all Americans to get those rights.[14] At the very least, the American Revolution announced a rupture with the narrative of history. By denouncing monarchial privilege, it made liberty the sole raison d’être of government.[15]

Where America tried to break with the past, Egypt’s constitution makes narrative continuity the whole point.[16] The constitution does not trace its genealogy to the 2011 ousting of the autocrat Mubarak (nor even to last year’s coup), but rather to “the dawn of human conscience”—when, the preamble assures us, mankind’s first and foremost feat was “to build the first central state.”[17] This is not man in a state of nature, banding together in a social pact as an existential compromise; this is man vindicating his existence through authority.[18] Granted, the preamble eventually cedes that the people are “the source of authority.”[19] Yet this appears only after affirming and applauding the long and storied “bond between the Egyptian people and their patriotic army that bore the trust and responsibility of protecting the homeland.”[20]

There are two noteworthy effects of this narrative continuity. First, it renders Egypt’s seesaw between dictatorship and military overthrow less a series of hiccups, and more like par for the course. Here, the constitution does not announce a new Egypt birthed from the labor of revolution, but instead declares the maturation of an ancient nation dating to the pharaohs, one in which the military has always held a place. The military’s political custodianship is simply and legitimately embedded in the process of national evolution; indeed, the army is Egypt’s so-called “pillar.”[21] Secondly, the narrative reaffirms what the exemplary men and women in Tahrir Square knew all along: that the army is an entity distinct from the people, whose destiny depends to an alarming degree on those in power.

In the context of the army’s longstanding role in Egyptian history—and the preamble’s affirmation of that role—certain constitutional provisions seem rather conspicuous. The power of the military is deeply embedded in this new constitution as Article 201 places at the army’s helm a commander-in-chief appointed from among the army.[22] Article 234 subjects the commander-in-chief’s appointment to the approval of the army’s own Supreme Council.[23] To add insult to unaccountability, the military’s budget is determined not by legislators, but by the National Defense Council.[24] This is to say nothing of less obviously militant matters—like Shari’a being “the principle source of legislation,”[25] or freedom of religious practice being restricted to the “revealed religions.”[26] With these terms embedded in the constitution itself, it seems as though there will simply be more of the old.

It may be premature to wax pessimistic on a constitution only recently approved, but the narratives behind law provide their own premonitions. In Egypt, the constitution legitimizes the narrative paradigm of bloated, ancient authority, inseparable from military primacy and prerogative. One would have hoped to see “the heart of the whole world”[27] do better.

[11] Jonathan Adelman, Historically, Egypt’s Revolution is More of the Same, Reuters (July 8, 2013), http://blogs.reuters.com/great-debate/2013/07/08/historically-egypts-revolution-is-more-of-the-same/ (noting that while the American Revolution is often cited as a “bastion of liberty,” the reality of the initial government-making failed to carry out this ideal, and expansive, principled liberty was only achieved through a long process of democratic expansion).