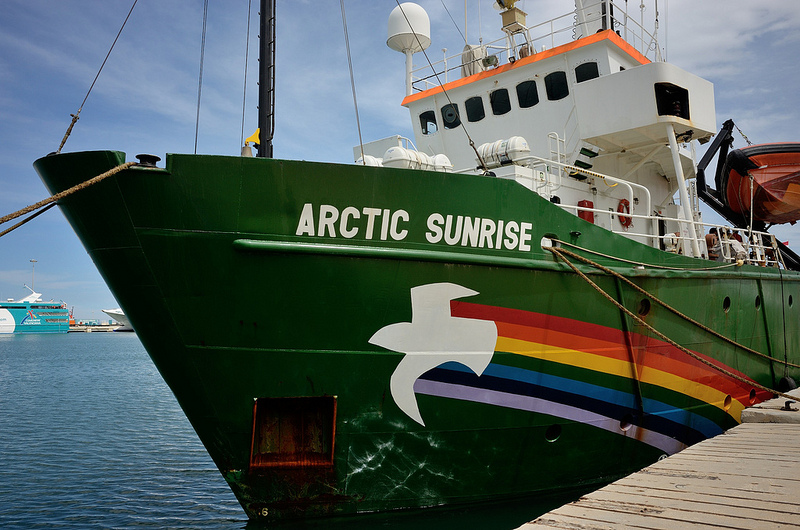 In the final chapter of Greenpeace’s recent Arctic saga, the Russian Federation has released thirty of the organization’s members, which had been held since mid-September.[1] The release comes after the Russian parliament granted the activists amnesty through a bill passed in December.[2] While the amnesty bill means the end of the legal battle over the members’ actions, the case still presents an interesting case study in jurisdiction under the U.N. Convention on the Law of the Sea. This essay explores the Arctic Sunrise case and argues that, had proceedings before the International Tribunal for the Law of the Sea continued, the Tribunal likely would have found that Russia had jurisdiction to prosecute Greenpeace’s activists.

On September 18, the Greenpeace ship, Arctic Sunrise, was protesting oil drilling in the Pechora Sea, north of Russia. The Arctic Sunrise, a Dutch-flagged vessel, was focusing its efforts on the Prirazlomnaya platform, a stationary installation that operates thirty-two nautical miles off the coast, in Russia’s exclusive economic zone.[3] Once Greenpeace members arrived at Prirazlomnaya, things got out of hand when members of the ship began scaling the platform.[4] In response, armed Russian border guards seized the ship and arrested its crew.[5] According to one crewmember’s account, the seizure was “quite scary,” until the border guards realized that the Arctic Sunrise crew posed no real threat.[6] After boarding, the agents began raiding the ship for alcohol and getting drunk.[7] Later, the Russian authorities jailed the thirty crew members and towed the ship to port in Murmansk.[8]

The prosecutor originally charged the crew of the Arctic Sunrise with piracy under Article 227 of the Russian Criminal Code.[9] Article 227 defines piracy as “[a]ssault on a sea-going ship or a river boat with the aim of capturing other people’s property, committed with the use of violence or with the threat of its use . . . .”[10] If committed by an organized group—which Greenpeace would likely qualify as—the punishment for piracy is ten to fifteen years in prison.[11] However, under the facts of the case, it would have been very difficult to prove that the crew was attempting to capture property and that the oil rig was a “sea-going ship” or “river boat” under the Article 227. Indeed, even Vladimir Putin stated that the members of Greenpeace were not pirates.[12] Thus, Russia needed an alternative charge, if it wanted to penalize the crew members.

Eventually, the Russian authorities downgraded the charge to hooliganism.[13] Under Article 213, hooliganism is defined as “a gross violating of the public order . . . attended by reason of political, ideological, racial, national, or religious hatred.”[14] The crime carries a seven-year maximum sentence, half the punishment of a piracy conviction.[15] However, Russia continued to hold the Arctic Sunrise and its crew.

In response to Russia’s actions, the Netherland initiated an action before the International Tribunal for the Law of the Sea (ITLS), demanding the release of the Arctic Sunrise and its crew on the grounds that Russia violated the U.N. Convention on the Law of the Sea (UNCLOS).[16] Russia, however, refused to participate in the ITLS proceedings, arguing that the Tribunal did not have jurisdiction to hear the case.[17] The ITLS, continuing the proceedings without Russia, found that it did have jurisdiction to hear the case and ordered Russia to release the prisoners and the Arctic Sunrise on a bail of € 3.6 million.[18]

Under the UNCLOS, which both the Netherlands and the Russian Federation are parties to,[19] “the [ITLS] has jurisdiction over all disputes concerning the interpretation or application of the Convention . . . .”[20] However, the UNCLOS also provides some optional exceptions to the ITLS’s jurisdiction for countries who have given written notice. In particular, the UNCLOS allows countries to opt out of the ITLS’s jurisdiction for “disputes concerning law enforcement activities in regard to the exercise of sovereign rights or jurisdiction excluded from the jurisdiction of a court or tribunal under article 297, paragraph 2 or 3.”[21] Paragraphs 2 and 3 of Article 297, in turn, concern disputes over the provisions of the UNCLOS that relate to marine research and fisheries.[22]

In bringing its action, the Netherlands alleged, among other things, that Russia violated Article 58 by boarding and detaining the Arctic Sunrise.[23] Russia responded that the ITLS did not have jurisdiction because Russia had previously taken advantage of the UNCLOS’s voluntary opt-out provisions. The ITLS did not have jurisdiction, Russia argued, because the Arctic Sunrise case concerned Russia’s law enforcement activities.[24] The ITLS, however, rejected this argument on the grounds that the Article 297 only concerns maritime research and fishing.[25] Thus, because Greenpeace’s activities concerned neither of these subjects and because “the dispute with the Russian Federation concern[ed] the interpretation and application of certain provisions of the Convention,” the exception did not apply and the ITLS had jurisdiction.[26]

Once it established its jurisdiction, the ITLS used its power to prescribe provisional remedies[27] to order the release of the Arctic Sunrise and its crew, subject to the posting of a bond by the Netherlands.[28] However, the ITLS did not address the issues of whether the activists were hooligans, whether Russian courts had jurisdiction to try them, or whether Russia acted in violation of the UNCLOS by detaining them and the Arctic Sunrise.

Had the ITLS reached the merits, it likely would have found that Russia had jurisdiction to charge and try the activists. Article 56 of the UNCLOS grants coastal states the sovereign right to exploit the resources within their exclusive economic zone,[29] subject to other states’ freedoms of the high seas (e.g. the freedom of navigation and overflight).[30] The right of exploitation includes the right to construct artificial islands and installations within the exclusive economic zone.[31] Article 60(2) states that a coastal state “shall have exclusive jurisdiction over such artificial islands, installations and structures, including jurisdiction with regard to customs, . . . health, [and] safety . . . laws and regulations.”[32]

Here, the Greenpeace activists and their ship were present in Russia’s exclusive economic zone, and Russia charged the activists with hooliganism for scaling the Prirazlomnaya platform. Because the law against hooliganism is arguably meant to promote safety, it would likely fall under Article 60(2) of the UNCLOS, meaning Russia would have jurisdiction to prosecute the activists.

Moreover, even if the ITLS found that the hooliganism law did not concern customs, health or safety, Russia would still have a viable argument under Article 60. Because the provision is written in inclusive terms, the reference to customs, health and safety arguably does not necessarily limit a coastal state’s jurisdiction on its artificial islands and installations. Russia could argue that it had complete jurisdiction over any activities on the Prirazlomnaya platform, regardless of the type of activity. Thus, Russia would have had the authority to board the Arctic Sunrise and arrest its crew.

Of course, even if the ITLS found that Russia had proper jurisdiction, the Tribunal still likely would have required Russia to release the ship and its crew. Even where an arrest within the exclusive economic zone is proper, Article 70(2), requires coastal states to release vessels and their crew once they post bail.[33] Thus, Russia may not have had the authority under the UNCLOS to detain the activists until trial. This could have been problematic if Russia had pursued the prosecution because the Greenpeace activists were likely a flight risk.

Given the recent actions of the Russian parliament, the legal issues in the Arctic Sunrise case are, as a practical matter, irrelevant. However, the case still presents an interesting case study in jurisdiction under the UNCLOS. While Russia was wrong that the ITLS did not have jurisdiction to hear the case, the country would have likely prevailed on the merits, had it participated in the hearings and continued its attempt to prosecute the Greenpeace activists. The ITLS likely would have held that Russia had proper jurisdiction to charge the activists with hooliganism.

Of course, just because Russia would have had the right to prosecute the activists does not mean the Russian authorities would have prevailed in the case before a Russian court. Moreover, even if Russia did have jurisdiction, it likely did not have the right to detain the activists until their trial. This may have given them an opportunity to leave the country beforehand.

[1] See 100 Days after They Were Seized, Arctic 30 are Leaving Russia, Greenpeace (Dec. 27, 2013), http://www.greenpeace.org/international/en/press/releases/100-days-after-they-were-seized-Arctic-30-are-leaving-Russia-/.

[15] Again, the sentence is increased when committed by an organized group. Id.

[19] Chronological Lists of Ratifications of, Accessions and Successions to the Convention and