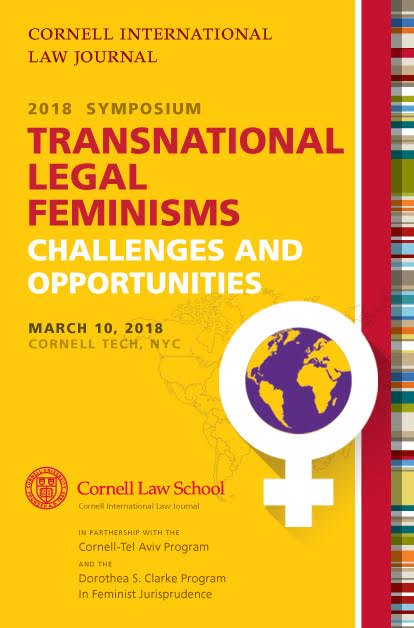 The Cornell International Law Journal’s 2018 symposium explores the development of feminist movements across various national legal regimes and discusses the broader implications of these regional developments on the broader landscape of transnational feminism.  The papers presented at the conference consider localized case studies, comparisons of the legal regimes of various nations, and the developments of International Human Rights Law pertaining to issues of sex and gender across the world.

Case studies furnish a rich landscape for discussion of the efficacy of transnational norms to disparate legal and social regimes.  Cynthia Bowman’s article, presented by Elizabeth Brundige, looks at the treatment of domestic violence in the legal regime and social institutions in Ghana, comparing this case study with developments in other African nations.  Nkatha Kabira’s paper, presented by Patricia Kameri-Mbote, looks at the case study of the development of Kenyan feminism in a constitutional democracy and in the broader context of transnational women’s rights; addressing issues such as female genital mutilation and reproductive rights.  Hila Shamir’s work, presented by Kate Mogulescu, proposes a hybrid approach to the regulation of sex work and relies on the Israeli case study to illustrate the benefits and drawbacks of such an approach, which creates a gap between de jure and de facto legal regimes.

Comparative legal methodologies analyze the developments of specific areas of law in differently situated nations.  Aziza Ahmed’s paper, presented by Rachel Rebouché, considers the significance of the development of the HPV vaccines on feminist thought in the United States and in India.  Sital Kalantry’s article, presented by Annelise Riles, draws on comparative legal methodologies to consider the efficacy of transnational feminist developments like the #MeToo movement and the legal treatment of surrogacy transactions in the United States and in India.

Regional developments have shaped the discourse around the understanding of International Human Rights.  Lina M. Cespedes-Baez, whose work will be presented by Saptarshi Mandal, applies the lens of international human rights to Colombian internal armed conflict, focusing on the disparate impacts of such conflicts on women.  Chao-ju Chen’s work, presented by Suzanne Goldberg, discusses the relationship between the global movement for marriage equality and feminist critiques of the institution of marriage.  Natalie Davidson’s article, presented by Janet Halley, considers the possibility of expanding International Human Rights Law, called to reform in post-liberal discourse, to domestic violence.

We have included reactions from our editors to some of the papers that will be presented at Symposium and published in our Symposium Edition. Thank you to our wonderful authors for their papers and our editors Dylan Penza, Eric Finkelberg, and Annalisa Choy for their reactions.

Response to The Feminist Expansion of Torture: Towards a Post-Liberal International Human Rights Law by Dylan Penza

Response to  A (Feminist) Farewell to Arms: The Impact of the Peace Process with FARC-EP on Colombian Feminism by Eric Finkelberg