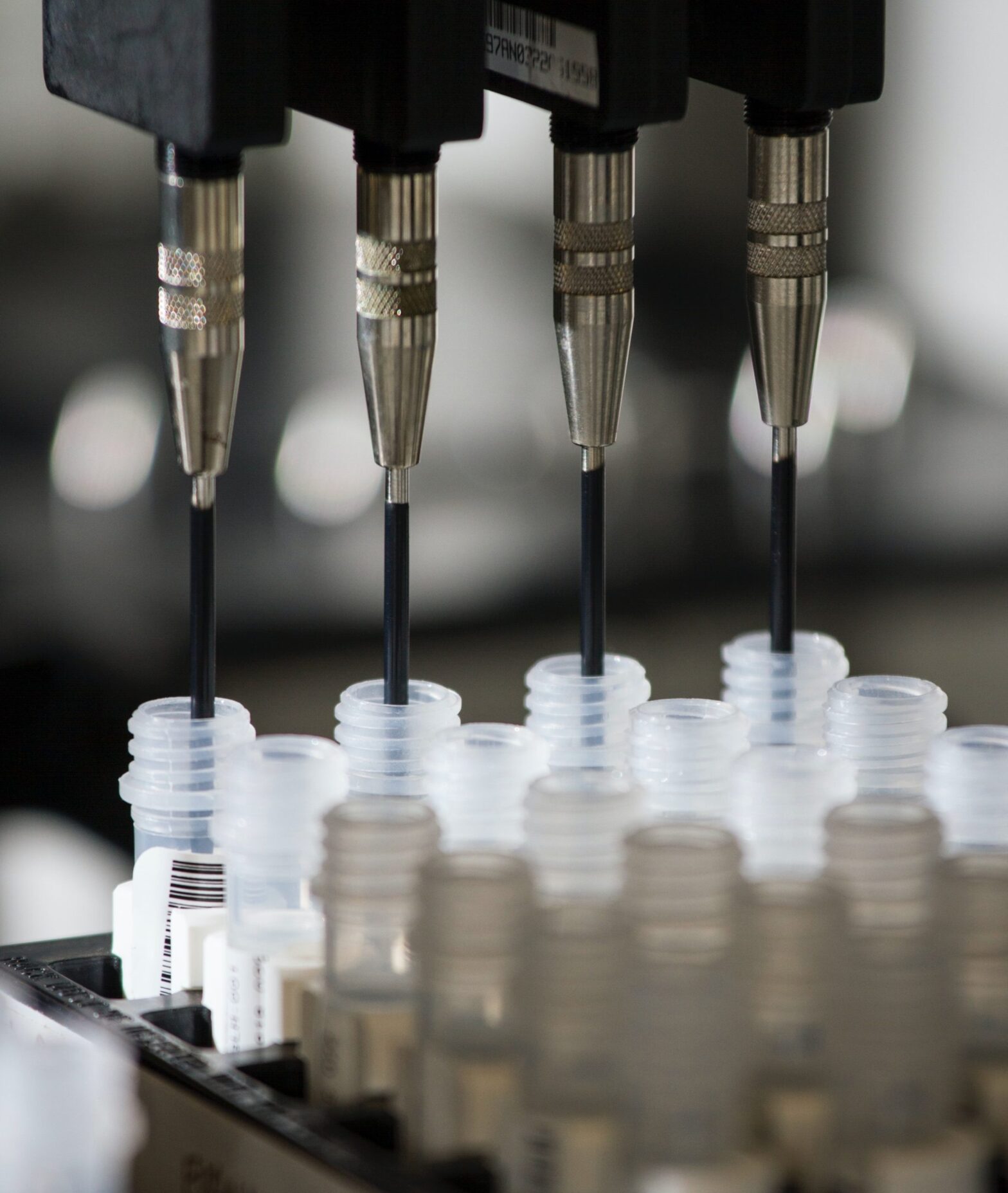 CRISPR is a molecular system that precisely targets and cuts DNA, essentially enabling scientists to efficiently and inexpensively edit an organism’s genes.[5]  Scientists can use CRISPR to accurately locate a specific gene, excise it, and replace it with a new one.[6]  This powerful mechanism has both therapeutic and cosmetic implications.[7]  Therapeutic applications include curing diseases such as cancer, Alzheimer’s, or sickle cell disease.[8]  For example, scientists have successfully reprogrammed the immune cells in mice to attack tumors.[9]  Cosmetic applications involve altering physical characteristics, such as eye color.

Human cells are generally split into two categories: germline cells and somatic cells.  CRISPR can be applied to both.[10]  Germline cells give rise to reproductive cells, namely, egg and sperm.[11]  Therefore, if CRISPR edits the DNA in a germline cell, that alteration will be passed on to the next generation.  Understandably, germline gene editing has incited controversy and debate. Somatic cells are all other cells that make up the body.[12]  In contrast, if CRISPR edits the DNA in an individual’s somatic cell, the alteration will remain with that individual and will not be passed on to any offspring.  This Note argues that international principles permit the therapeutic, but not cosmetic applications of CRISPR in human germline cells.

In an attempt to facilitate CRISPR’s introduction to market, MPEG LA, LLC, an intellectual property management firm, issued a call for CRISPR patent holders worldwide to submit their patents to a patent pool.[16]  Patent pools aim to simplify licensing transactions by creating a “one-stop shop” for complex technologies with multiple components.[17]  In response to MPEG LA’s call for submissions, the Broad Institute of MIT and Harvard, a holder of major CRISPR patents, has entered discussions to submit its patents to the pool.[18]  On the other hand, University of California–Berkeley (UCB), another holder of important CRISPR patents, has indicated that it will not submit its patents to the pool due to licensing conflicts.[19]  The Broad Institute and UCB have been in a prolonged patent dispute over key CRISPR patents, a battle which may have contributed to the delay in disease treatment breakthroughs.[20]  Despite the ongoing patent dispute, the CRISPR patent pool will help bring CRISPR to the market, to a degree.  That is, doctors will be able to use CRISPR products to edit the DNA of their patients.

Scientists believe that it is not a matter of “if,” but “when” CRISPR-related products are introduced to the market.[21]  Despite the prematurity of CRISPR products, CRISPR has caught the attention of the FDA.[22]  Ritu Nalubola, the FDA’s senior policy advisor, indicated that the FDA “is in the early stages of building capacity to regulate treatments that use the CRISPR-Cas9 technology.”[23]

For years, scientists have edited the DNA in somatic cells using mechanisms other than CRISPR. [24]  These older technologies have paved the way for regulation of CRISPR-editing in this class of cells.[25]  For example, in the United States, the FDA and NIH oversee somatic cell gene editing through established regulatory procedures.[26]  As such, somatic cell gene editing is already being tested in human subjects in the United States, as well as in Australia, China, Europe, and Japan.[27]

The extent to which countries regulate gene-editing research in germline cells varies greatly, which perhaps reflects the conflicting views on the legal and moral status of the human embryo.[28]  Across the globe, human germline editing remains premature and has only been tested in non-viable embryos, rather than embryos intended for gestation.[29]  In the United States, germline cell research is allowed at the national level, but prohibited by some state governments.[30]  State laws or private funders govern gene-editing research in germline cells because the Dicky-Wicker Amendment of 1995 prohibits federal funding of such research.[31]  The United Kingdom regulates gene-editing technologies similarly to the United States, but has a more robust and centralized regulatory scheme to oversee human germline research.[32]  Other countries, such as Chile, Germany, Italy, Lithuania, and Slovakia prohibit human germline gene-editing research altogether.[33]  CRISPR Therapeutics, a Switzerland-based company worth about $650 million, has indicated that it will “get to the task of curing disease” after the CRISPR inventors overcome the intellectual property issues.[34]

At an international summit in December 2015, representatives from several nations met to discuss the recent advances in gene-editing technology.[35]  The discussion highlighted several ways countries approach human gene editing.[36]  Nigeria indicated that it is very interested in gene editing to address the nation’s high rate of sickle cell disease, but expressed that it would need to improve its clinical and research capacity before moving forward.[37]  In contrast, Israel offered extensive support for prenatal genetic interventions, owing in part to the fact that its religious authorities are in favor of research with a therapeutic benefit.[38]  Indira Nath, a representative from the All India Institute of Medical Sciences, pointed out that governance is becoming increasingly international.[39]  She indicated that the laws of one country can no longer control technologies because “[i]f there is a demand for a technology, people will go to whichever country has it.”[40]

Because science is borderless, “medical tourism” has become a widespread phenomenon.[41]  Medical tourism occurs when a patient from one country travels abroad to receive healthcare.[42]  For example, if a citizen needs a gene-editing treatment, but lives in a country that outlaws it, the citizen may travel to another country that permits such practice.  Given medical tourism’s expansion and CRISPR’s potential to alter global genetic diversity, CRISPR warrants international regulation.  Thus, CRISPR should be held to a baseline legal standard that serves as a minimum for the countries that do not fully prohibit gene editing.  Under international principles, CRISPR may be used for therapeutic applications, but not cosmetic alterations in offspring.

Three international declarations are of particular interest here: the Universal Declaration of Human Rights (UDHR), the Universal Declaration on the Human Genome and Human Rights (UDHGHR), and the Universal Declaration on Bioethics and Human Rights (UDBHR).  Although these declarations are not binding, they play an important role in establishing international norms while simultaneously respecting state autonomy.  The UDHR was adopted in the wake of WWII and the Nazi eugenics movement.[43]  The preamble states that “recognition of the inherent dignity and of the equal and inalienable rights of all members of the human family is the foundation of freedom, justice and peace in the world.”[44]  Article 1 reads, “[a]ll human beings are born free and equal in dignity and rights.”[45]  The UDHGHR was unanimously adopted by the General Conference of UNESCO in 1997 and was endorsed by the UN General Assembly in 1998.[46]  Article 11 of the UDHGHR states that “[p]ractices which are contrary to human dignity, such as reproductive cloning of human beings, shall not be permitted.”[47]  Article 12(b) adds that “[t]he applications of research . . . concerning the human genome, shall seek to offer relief from suffering and improve the health of individuals and humankind as a whole.”[48]  The UDBHR, adopted by the UNESCO General Conference in 2005, aimed “to underline the importance of biodiversity and its conservation as a common concern of humankind.”[49]  Article 7 of the UDBHR addresses “[p]ersons without the capacity to consent” and states that “research should only be carried out for his or her direct health benefit . . . . Research which does not have potential direct health benefit should only be undertaken by way of exception, with the utmost restraint, exposing the person only to a minimal risk and minimal burden.”[50]

Taken together, these international declarations set forth the principle that gene editing should be used for therapeutic purposes only, rather than for cosmetic purposes.  CRISPR’s therapeutic applications fall under the permissible application of research that “offer[s] relief from suffering” as outlined by the UDHGHR and provides a “direct health benefit” as stated by the UDBHR.  However, CRISPR’s cosmetic applications conflict with the concept of “inherent dignity” set forth by the UDHR and qualify as a practice “contrary to human dignity, such as . . . cloning” as stated in the UDHGHR.  Given that the UDHR’s concept of “inherent dignity” was a response to Nazi eugenics, it would suggest that cosmetic gene editing threatens such “inherent dignity.”  Although the Nazi eugenics movement was far more drastic than cosmetic gene editing, the underlying principles are the same—that certain people have the power to arbitrarily determine inferior characteristics and then take action to select against them.  Similarly, CRISPR’s cosmetic application to human embryos qualifies as a practice “contrary to human dignity” because it suggests that certain characteristics are superior to others.  Furthermore, cosmetic gene editing does not have a “direct health benefit” yet involves a great degree of risk.

Recent advancements in the CRISPR gene-editing technology demonstrate that it is only a matter of time before CRISPR products enter the market.  However, CRISPR’s potential to change the world calls for its regulation.  Although science has become increasingly global, different countries regulate gene editing to varying degrees, necessitating a minimum international standard.  Of importance are the international principles outlined in the UDHR, the UDHGHR, and the UDBHR.  Under these principles, CRISPR gene editing may be used to therapeutically cure disease, but may not be used to cosmetically alter physical characteristics in human embryos intended for gestation.  The principles underlying cosmetic gene editing, like those central to the Nazi eugenics movement, conflict with the UDHR’s concept of “inherent dignity.”  As with Nazi eugenics, cosmetic gene editing in human embryos affords individuals the power to select against certain physical characteristics in others.  Therefore, cosmetic germline gene editing is incompatible with international principles.

[46] UNESCO, Learning to Live Together: Universal Declaration on the Human Genome and Human Rights, http://www.unesco.org/new/en/social-and-human-sciences/themes/bioethics/human-genome-and-human-rights/.

[47] UNESCO, Universal Declaration on the Human Genome and Human Rights (1997).