The Abolition of Presidential Term Limits in Nicaragua: The Rise of Nicaragua’s Next Dictator? 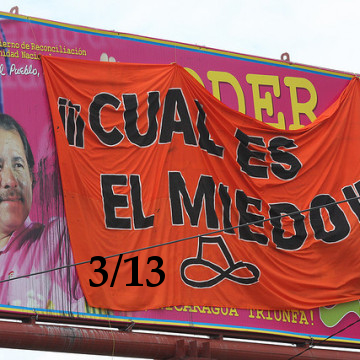 The Abolition of Presidential Term Limits in Nicaragua: The Rise of Nicaragua’s Next Dictator?

On November 6, 2011, Daniel Ortega won the presidential election in Nicaragua for the third time. In doing so, Ortega joined an exclusive, if perhaps rather unsavory group—the eleven percent of world leaders who overstayed their tenure in office by remaining past the post’s established term limits.[1] Constitutional changes that were approved by Nicaragua’s National Assembly on January 28, 2014 and which became effective on February 10, 2014 allow Ortega to potentially extend his administration to a fourth term in 2016.[2] This reform paves the way for Ortega to perhaps legally retain presidential power for life; as his current power grants him control over all four branches of the Nicaraguan government. This reform has led to both domestic and international concern. “What there is here is a dictatorship. Make no mistake[,]” said Liberal Nicaraguan congressman Luis Callejas.[3] The U.S. Department of State issued a parallel press release, stating “We share the concern of many Nicaraguans that this situation is part of a larger pattern of questionable and irregular governmental actions . . . that threatens to undermine the foundations of Nicaraguan democracy . . . .”[4] With these concerns in mind, this article examines the legal processes behind Ortega’s increasing presidential power. The article concludes by arguing that a combination of social mobilization, electoral participation, and media oversight stands as the only remaining check that Nicaraguans can exercise against their would-be president for life.

Ortega first won the presidency in 1984 as a member of the Sandinista National Liberation Front (Frente Sandinista de Liberación Nacional, or FSLN) in Nicaragua’s first election.[5] His win gave him official electoral power to go along with the revolutionary authority that he had amassed as one of the leaders of the Nicaraguan Revolution that toppled the Somoza dictatorship in 1979.[6] Ortega’s administration played a large role in drafting and passing the 1987 Nicaraguan Constitution, which has since been amended several times.[7] This constitution laid out the four branches of government in Nicaragua today—executive, legislative, judicial, and electoral—all of which currently have a Sandinista majority.[8] With little to no political checks and balances standing in the legislation’s way, the Sandanista legislative majority pressed for the term-extending amendments and easily surpassed the sixty percent majority vote required amend the constitution.[9] Each of the 63 FSLN members voted “yes”; the final vote was subsequently 64-25.[10] In opposition were the twenty-two votes of the right-wing Independent Liberal Party (PLI) and three abstaining officials; their 25 votes, however, clearly were no hindrance to the FSLN.[11]

The substance of this amendment was the reform to Article 147, which previously held that:

The following persons may not run for President or Vice President of the Republic:

a)    Persons who have exercised the full powers of the presidency at any time during the period when the election for the following term is held, nor anyone who has exercised them for two presidential terms.

b)    The Vice President of the Republic or the one called to replace him if he/she has exercised the full powers of his/her office or that of President in the two months prior to the [presidential] election for the following term.[12]

The 2014 amendment omits the provisions above, thus eliminating the two-term limit for the president as well as the ban on consecutive reelection.[13] The amendment also omits the following:

Article 148 remains unchanged; the president and vice-president still serve five-year terms punctuated by periodic elections.[15] Thus, while the amendment to Article 147 abolishes the minimum vote level requirement, the winning candidate must still obtain more votes than any other candidate.[16] As such, while the changes to the Nicaraguan Constitution have removed the consecutive and numerical term-limits, thus permitting Ortega to potentially retain office for life, he must still manage to be reelected every five years.[17]

The 2014 constitutional reform comes with Ortega two years into his third term. His third term is, of course, controversial; that he was able to be elected in 2011 for a third time despite the fact that the Nicaraguan Constitution at that time specifically barred presidents from consecutive reelection and from serving more than two terms was a point of serious contention. In 2009, Ortega lacked the legislative majority that he possesses today, and so was unable to amend the constitution through the legislature. He turned to the courts instead. A majority of the Constitutional Chamber of the Nicaraguan Supreme Court thus declared that the provisions of the constitution that established the reelection ban were themselves unconstitutional.[18] The court reasoned that the articles in the Nicaraguan Constitution—referred to by the court as the “Constituent Derivative”—violated the constitutional principle of unconditional equality by infringing on Ortega’s equal opportunity to run for office.[19] The Supreme Court President himself spearheaded the immediate public outcry to the decision, declaring the verdict “an ambush” in which the FSLN majority acted without his knowledge.[20] Vilma Nunez, the head of the Nicaraguan Center for Defense of Human Rights criticized both the nation and the decision by stating “This is the only country in the world where the court has declared the constitution unconstitutional . . . . [i]t’s a legal subterfuge.”[21] Following the decision, both pro-Sandinista and opposition groups mounted several protests, including lining the sidewalk in front of the Supreme Electoral Council with toilets, with copies of the Nicaraguan Constitution serving as toilet paper.[22]

IV. The Power of the People

Social mobilization like the toilet paper protests combine with regular elections and media oversight to create vertical accountability—the only remaining check that keeps Ortega from gaining absolute governmental power.[23] Due to the overwhelming majority of FSLN representatives loyal to Ortega in each branch, there exists virtually no horizontal accountability between the branches. “There’s no institutional counterweight to them,” noted Carlos Fernando Chamorro, a prominent Nicaraguan journalist and onetime FSLN supporter. [24] With no checks available within the government itself, the burden of preventing the looming Ortegan dictatorship falls on the public. Vertical accountability proved to be effective for preserving democracy throughout the 80s and 90s, which saw each of the three major Nicaraguan political parties win the presidency and make an attempt to consolidate power into authoritarian rule, only to be met with criticism in the press, public outcry and mobilization, and subsequent defeat in the next election.[25] It remains to be seen whether Ortega’s “manhandling [of] the constitution” will be met with a similar public backlash in the upcoming 2016 election or whether he will continue the longest tenure in power since the dictator that he overthrew in 1979.[26] It seems clear, however, that this is the only remaining avenue of effective opposition outside of staging a coup. The government of Nicaragua was created as a democracy by the people and for the people; it is now once again up to the people to do what is necessary to retain their democracy.