World War II in Glendale: A Look Back at Hwang v. Japan 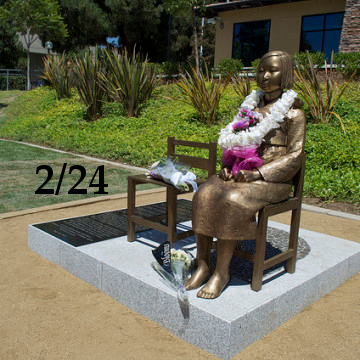 A Look Back at Hwang v. Japan

In Glendale, a suburb in the Greater Los Angeles Area, there is a bronze statue of a girl in traditional South Korean dress seated next to an empty chair.[1] Despite being less than a year old,[2] the statue has already received overseas visits from three delegations of Japanese politicians.[3] They did not come to admire it, however; instead, they wanted it taken down.[4]

The statue is a memorial to the nearly 200,000 Korean, Filipina, Chinese, Taiwanese, Indonesian, and Dutch “comfort women,” or sex slaves, whom the Japanese conscripted into military brothels during World War II.[5] In the 1930s and 1940s, Japan established a system of these military brothels, known as “comfort stations,” throughout Asia; these brothels were staffed by female victims who claimed that they were kidnapped by the Japanese and forced into sexual slavery.[6] The Japanese created this system to provide its soldiers with sexual gratification; to that end, they forced the women to receive up to thirty men each day.[7] Japanese soldiers raped countless women — some even teenagers — in their conquest of China and other parts of the Asian continent.[8] “[The women] cried out, but it didn’t matter to us whether [they] lived or died,” said Yasuji Kaneko, a soldier in the Imperial Japanese Army in World War II.[9] “We were the emperor’s soldiers. Whether in military brothels or in the villages, we raped without reluctance.”[10]

The statue in Glendale has attracted people from far and wide since its erection in July 2013, including an Irvine resident who had heard his grandmother’s stories of Japanese soldiers “hunting” teenage girls[11] and three delegations of politicians from Japan asking the city to take the statue down.[12] A Japanese high school even cancelled its U.S. exchange program with its sister city school in Glendale as a result of the continued existence of the statue.[13] “The news that the statue was installed made a big noise in Japan,” said Yuzuru Nishida of Chiba, a member of the Japan Restoration Party.[14] “[The statue] hurts Japan’s honor.”[15] Opponents like Nishida say that the women “willingly” prostituted themselves and claim the estimated number of comfort women is greatly inflated.[16] These statements continue to come despite direct evidence showing that military authorities had a direct role in forcibly procuring women for the brothels.[17]

The statue dispute in Glendale is not the first time that the issue of comfort women arose in the United States. The victims have not had much luck elsewhere. It took over fifty years after World War II for the Japanese government to even acknowledge that it had played a role in the formation and upkeep of the comfort stations; the government had previously preferred to attribute comfort stations to those who employed “voluntary prostitutes.”[18] The Japanese government was successful in dismissing almost all of the lawsuits filed against it by former comfort women, and only two cases were ever actually adjudicated. Ha v. Japan was adjudicated in late 1992 at the Yamaguchi Prefectural Court in Japan and ended with the Hiroshima High Court’s finding that the Japan-Korea Settlement of Claims Agreement precluded any further litigation concerning war-era allegations.[19]

Convinced that they would never succeed in a Japanese court, the women searched for a new jurisdiction to file their claims, eventually choosing the United States. In 2000, fifteen women from China, Taiwan, South Korea, and the Philippines filed Hwang v. Japan.[20] They sued in the U.S. District Court for the District of Columbia under the Alien Tort Claims Act (ATCA),[21] seeking monetary damages for “having been subjected to sexual slavery and torture before and during World War II” in violation of “both positive and customary international law.”[22] Under the ATCA, federal district courts have original jurisdiction over any civil action by an alien plaintiff for a tort committed in violation of the Law of Nations or a treaty of the United States.[23]

The relevant test for whether the United States had jurisdiction over Japan, and thus would be able to provide relief to the fifteen who had filed suit, was found in the Foreign Services Immunities Act (FSIA).[24] Section 1605(a)(2) of the FSIA provides that “a foreign state shall not be immune from the jurisdiction of courts of the United States” in any case involving “an act outside the territory of the United States in connection with a commercial activity of the foreign state elsewhere and that act causes a direct effect in the United States.[25] The district court dismissed the appellants’ complaint based on the first prong of Section 1605(a)(2),[26] concluding that Japan’s activities did not “arise in connection with a commercial activity” and therefore did not fall within the commercial activity exception in the Foreign Sovereign Immunities Act (FSIA).[27] In keeping with this decision, the court refused to consider whether Japan’s alleged conduct even caused a “direct effect in the United States.”[28] The court then noted that “the series of treaties signed after the war was clearly aimed at resolving all war claims against Japan” and held in the alternative that the plaintiffs’ complaint presents a nonjusticiable political question.[29]

The appellate court affirmed, holding that Japan would have been afforded absolute immunity from suit in the United States at the time of the alleged activities,[30] and that Congress did not manifest a clear intent for the commercial activity exception to apply retroactively prior to May 19, 1952, when the State Department first came up with the retroactive theory of immunity later codified in the FSIA.[31]

In 2004, however, the Supreme Court of the United States decided Republic of Austria v. Altmann, a case where the heir of the original owner of several paintings seized by the Nazis sued the Republic of Austria and the state-owned Austrian gallery for the return of the paintings.[32] The Court held that the FSIA applies “regardless of when the underlying conduct occurred.”[33] Accordingly the Court granted the Hwang v. Japan appellants’ petition for a writ of certiorari, vacated the appellate court’s judgment, and remanded.[34]

On remand, however, the Court of Appeals for the D.C. Circuit affirmed once more.[35] The court found that it did not need to resolve the question of the district court’s subject-matter jurisdiction as the suit still presented a nonjusticiable political question:  whether the governments of the appellants’ countries had already resolved all current claims and foreclosed any future claims against the Japanese government by negotiating peace treaties with Japan.[36] Because the United States was not party to these post-World War II treaties, U.S. district court was an inappropriate forum to resolve the appellants’ claims; in addition, the court ruled that “it is pellucidly clear the Allied Powers intended that all war-related claims against Japan be resolved through government-to-government negotiations rather than through private tort suits.”[37] The D.C. Court of Appeals repeated, “[as] much as we may feel for the plight of the appellants, the courts of the United States simply are not authorized to hear their case.”[38]

The Glendale statue sits today somewhat like the Hwang case itself, thousands of miles away from the Asian countries that it has inflamed the passions of. A petition to have the statue removed gained support, collecting more than 100,000 signatures;[39] it was immediately followed, however, by a petition to protect the statue that also garnered more than 100,000 signatures.[40] Some supporters of the statue do not seem concerned with these petitions: “We don’t really think much of it because . . . it is the local government[‘s] jurisdiction to install or remove a statue,” said Phyllis Kim, a member of the Korean-American Forum of California, an organization that helped pay for the monument.[41] “All [the surviving comfort women] want is to receive a sincere apology.”[42]

Judicial remedy in U.S. courts seems almost completely foreclosed for the comfort women survivors, and it is unclear whether they will ever be able to find any other jurisdiction that will allow them to obtain relief. The statue that sits in Glendale, CA today does not ask for any kind of relief; its purpose is to raise awareness about the atrocities that took place decades ago in countries far away across the Pacific Ocean. In doing so it also serves, perhaps unbeknownst to the quarreling parties, as a parallel to Hwang and its progeny; the United States, as much as the American judiciary may “feel for the plight”[43] of these women, is unfortunately not the place for this dispute.

[40] Please Protect the Peace Monument in Glendale Central Library, We the People, The White House, https://petitions.whitehouse.gov/petition/please-protect-peace-monument-glendale-central-library/Zl0fHlLP.