Between a Rocket and a Hard Place: Difficult Decisions in U.S. Arms Limitation Treaty Enforcement 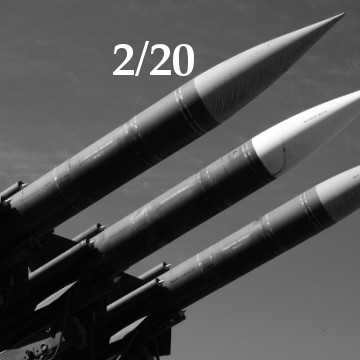 Between a Rocket and a Hard Place:

As Russia and the United States stood on the brink of a curling, hockey, and skiing showdown at the Sochi Winter Olympics, the United States was edging closer towards a far more bitter contest. The U.S. had suggested that Russia had violated the Intermediate-range Nuclear Forces Treaty (INF treaty), signed between the U.S. and the Soviet Union in 1987.[1] The INF Treaty came into effect in the waning years of the Cold War and banned ballistic and cruise missiles with [2] a range between 1000 and 5500 kilometers.[3]

Although the U.S. has briefed NATO members on its concerns, the potential diplomatic dispute has simmered for over a year.[4] While U.S. confidentiality over the exact missile at issue has kept the specifics of their claims unclear,[5] the weapon appears to be Russia’s RS-26 missile—a missile Russia claims is an intercontinental ballistic missile (ICBM) and not an intermediate-range missile.[6] If Russia’s claim is true, the RS-26 would be covered under the New Strategic Arms Reduction Treaty (New START) instead of the INF Treaty. The fluid way that Russia treats the boundary between the INF Treaty and New START means that the U.S. must walk a fine diplomatic line in its relations with the Russians. Antagonizing the Russians could lead to a complete Russian exit from the arms limitation framework established by New START and the INF Treaty; too relaxed a tack would allow the Russian missile-classification shenanigans to stand, resulting in a de facto dissolution of the arms limitations. The U.S. is caught between two unpleasant poles, with little relief in sight.

Under the INF Treaty, all short-range and mid-range missiles were to be disabled. Article XI, the teeth of the INF treaty, provided that each party had the ability to conduct on-site inspections of their counterpart’s missile launching sites to ensure that they were complying with the treaty.[7] After 13 years, however, these inspection permissions expired, blunting the treaty’s teeth.[8] New START was signed into effect April 8, 2010; it limited but did not completely eliminate long-range missiles or ICBMs.[9] Long-range missiles are defined in Part One of New START as having a range in excess of 5500 km.[10]

Both treaties provide for explicit withdrawal procedures. Under New START Article XIV, and INF Treaty Article XV, each party has the right to pull out of the treaty under “extraordinary circumstances.”[11] However, the two treaties impose waiting periods before the withdrawal becomes effective.[12]

Russia has been contemplating withdrawal from the INF Treaty for several reasons. Russia believes that the treaty only benefits the U.S., as the U.S. really has no need for intermediate-range missiles.[13] According to Sergei Ivanov, the Kremlin chief of staff, missiles covered under the INF could only be used by the United States to attack Canada or Mexico.[14] The U.S. is separated from potential rivals in Europe and Asia by a large expanse of ocean; Russia lacks this natural water barrier, and instead faces many nearby threats that necessitate the stockpiling of an arsenal of intermediate-range missiles. China’s emerging nuclear arsenal and its refusal to engage in arms discussions with either the United States or the Russian Federation has been cited as a concern.[15] To respond to these geographic worries and fulfill its treaty commitments, Russia has played with the definitions and functions of its latest missiles. While the Russians classify the missile at issue, the RS-26, as an ICBM, it is effective at INF ranges. With this double-dipping functionality, Russia holds to New START’s strictures but reaps the utility of a shorter-range weapon.[16]

Domestic responses to the Russian violation have been mixed. Some experts believe that these issues concerning compliance are common and that “reliable methods” exist to resolve these routine concerns.[17] This approach is premised on the belief that compliance disputes should not be “used as an excuse to blow up a threat reduction mechanism that provides real security benefits for the United States.”[18] The current U.S. approach seems to align with this strategy. Although the U.S. has voiced its concerns with NATO members, it has not yet formally accused the Russian Federation of violating the treaty.[19] Too aggressive a diplomatic approach could lead to Russia invoking the withdrawal provisions of both arms limitation treaties.[20]

However, some Senators are pushing for legislation that will allow them to gain access to the missile information provided to NATO members.[21] Here, the concern for Republican Senators is that a weak stance lets Russia walk across the face of its treaty obligations with no repercussions.[22] If the U.S. backs down, it stands to lose face in other diplomatic efforts to restrict weapons of mass destruction, such as those in Syria and Iran.[23]

Given the passivity of the White House in this arena as of late, more aggressive accusations seem unlikely. Furthermore, the exact capabilities of the missiles are unknown, and so concrete evidence of an INF Treaty violation or New START violation is absent. But while the White House may seem to be taking the long-term, safer view in pursuing a subdued diplomatic approach, this tactic has its own pitfalls. The passivity threatens to bleed into other arms-limitation negotiations, and it presents Russia with no tough choices—they can continue to tinker with classifications and capabilities with little fear of a U.S. response. However, the exit provisions in both treaties provide little incentive for more decisive U.S. action. In short, whether the U.S. plays good cop or bad cop, the Russians win.

Citation: Alex Kerrigan, Between a Rocket and a Hard Place:

[2] Treaty Between the United States of America and the Union of Soviet Socialist Republics on the Elimination of Their Intermediate-Range and Shorter-Range Missiles, U.S.-U.S.S.R., art. II, Dec. 8, 1987, 1658 U.N.T.S. 363. available at http://www.state.gov/www/global/arms/treaties/inf2.html [hereinafter INF Treaty].

[9] Treaty Between the United States of America and the Russian Federation on Measures for the Further Reduction and Limitation of Strategic Offensive Arms, U.S.-Russ., Apr. 8, 2010, S. Treaty Doc. No. 111-5 (2010) available at http://www.state.gov/documents/organization/140035.pdf [hereinafter New START].

[10] Protocol to the Treaty Between the United States and the Russian Federation on Measures for the Further Reduction and Limitation of Strategic Offensive Arms, U.S.-Russ., Part One, Apr. 8, 2010, S. Treaty Doc. No. 111-5 (2010) available at http://www.state.gov/documents/organization/140047.pdf.