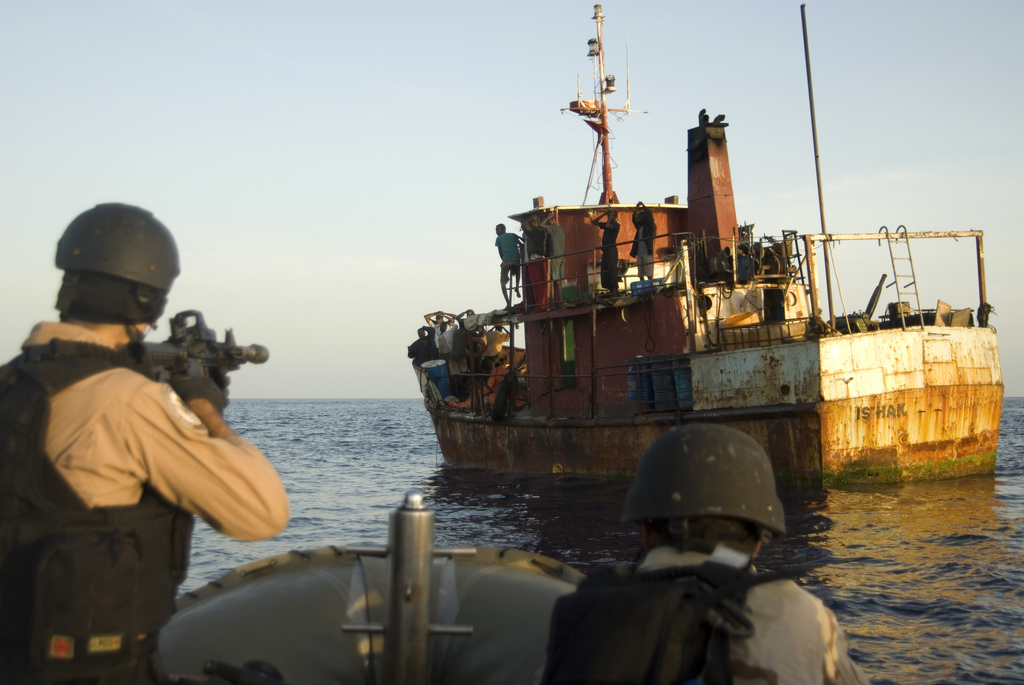 Piracy in Southeast Asia: An Overview of International and Regional Efforts

As the Security Council has repeatedly affirmed, international law, as reflected in the United Nations Convention on the Law of the Sea (UNCLOS), presents the primary legal framework for combating piracy and armed robbery at sea.[4] The UNCLOS, which has been ratified by nearly all of Southeast Asia,[5] obliges state signatories to cooperate to the fullest possible extent in the repression of piracy[6] and lays out the rules for doing so in articles 100 through 107.[7]

Article 101 defines piracy to include “any illegal acts of violence or detention . . . committed for private ends by the crew . . . of a private ship . . . and directed” against another ship or aircraft or the people or property on board, where the acts were committed on the high seas or outside the jurisdiction of any state.[8] If a state identifies a pirate ship on the high seas, UNCLOS allows it to seize the ship, arrest the persons on board, and seize any property on board.[9] In this way, the UNCLOS gives states a great deal of leeway to combat piracy on the high seas. However, one of the weaknesses of the UNCLOS is that its definition of piracy does not include attacks conducted in territorial seas.[10] Thus, if an attack occurs in a country’s territorial waters, another state may not have the authority to seize the pirate vessel, even if its own ship is the victim of the attack.[11]

Another legal instrument used to combat piracy is the Convention for the Suppression of Unlawful Acts against the Safety of Maritime Navigation (SUA Convention).[12] While the SUA Convention does not specifically aim to address piracy, piratical acts are subject to the SUA Convention.[13] Under Article 3, a person commits an offence if that person “seizes or exercises control over a ship by force or threat [of force]” or “performs an act of violence against a person on board a ship if that act is likely to endanger the safe navigation of that ship.”[14] In this way, the SUA Convention fills some of the gaps in the UNCLOS. Under the SUA convention, an offense does not require an attack to involve two ships or to occur on the high seas or in another area beyond national jurisdiction.[15] If a state apprehends an offender, it is required to either prosecute him or extradite him to the country that will.[16]

In 2004, several Southeast Asian countries adopted the Regional Cooperation Agreement on Combating Piracy and Armed Robbery (ReCAAP).[20] The Agreement, which came into force on 4th of September 2006, uses the same definition of piracy as Article 101 of the UNCLOS.[21] The ReCAAP also adopts the IMO’s definition of armed robbery from its Code of Practice on the investigation of crimes against ships.[22] Where there is an act of piracy, the ReCAAP provides extradition measures. According to Article 12, member states in accordance with their respective national laws must cooperate to extradite a person who has committed an act of piracy or armed robbery.[23] In this way, the ReCAAP has in part served as the Southeast Asian alternative to the SUA Convention.[24]

The ReCAAP also has it shortcomings. As a regional measure, the ReCAAP does not supersede the enforcement measures of UNCLOS. In line with this view, it does not allow member states to seize pirate ships in other states’ territorial seas. Also ReCAAP is incapable of having a large impact in terms of joint maritime enforcement operations because its provisions are mostly limited to information sharing.[25]

In order to fill this operational gap, several countries have begun other regional efforts to suppress piracy, particularly in Malacca Strait. The first of these, known as Operation MALSINDO, was launched in July 2004 and involved navies from three littoral states in Southeast Asia: Malaysia, Singapore and Indonesia.[26] Its task was to conduct coordinated patrols within the countries’ respective territorial seas around the Strait of Malacca. Since its launch, countries in the region have also supplemented the MALSINDO effort by launching aerial patrols over the Malacca Strait under the Eyes in the Sky (EiS) plan.[27] In 2006, the Malacca Strait Patrols (MSP) was formed which brought together the MALSINDO and the EiS efforts.[28] Since the formation of the MSP, Thailand has also joined MALSINDO and the EiS.[29]

As a result of these efforts, there has been a substantial drop in the number of pirate attacks in the Malacca Strait.[30] However, one of the weaknesses of the MSP is the effort does not allow for cross-border pursuits through other states’ territorial seas, as this is viewed as an interference with other states’ sovereignty.[31]

The Association of Southeast Asian Nations (ASEAN) has also made an effort to combat piratical attacks. ASEAN has been committed to discussing issues related to maritime security in its regular meetings. As the result, there are three prominent forums which address maritime security, namely the ASEAN Maritime Forum, the ASEAN Regional Forum Inter-Sessional Meeting on Maritime Security, and the Maritime Security Expert Working Group.[32] However, despite these efforts, the ASEAN forums are largely regarded as talk shops. Hence, in terms of coordinated efforts among ASEAN states, a more technical effort may be needed.

Despite the fall in attacks in the Malacca Strait,[33] piracy is still a serious problem in Southeast Asia, as the threat of piracy affects international commerce and human safety. Moreover, the international legal framework, including the UNCLOS and the SUA Convention, seem to be inadequate to resolve the problem.[34] The narrow definition of piracy in the UNCLOS does not encompass many of the piratical acts occurring in the region. Piracy often occurs in territorial seas whereas the UNCLOS only deals with piratical acts on the high seas.[35] Also, while the SUA Convention fills some of the gaps left by the UNCLOS, it is not popular among the countries of the region. Indeed, two of the most important littoral states in the region, Indonesia and Malaysia, are not party to the SUA Convention or its protocol.[36]

The regional legal framework also seems to be inadequate in resolving the problem. The ReCAAP has a small impact in terms of joint maritime enforcement operations. Also, like the SUA Convention, Indonesia and Malaysia have not acceded to the ReCAAP. Regarding the efforts of ASEAN, the Association’s forums are merely talk shops and likely have an even smaller impact than ReCAAP.

Recognizing that the MSP played a significant role in the suppression of piracy in the Strait of Malacca, similar efforts involving a larger number of countries in the region could be a part of the solution. While additional efforts based on the MSP would not allow for cross-border pursuits into territorial waters, this may actually be beneficial, as concerns about sovereignty have been some of the biggest barriers to multilateral cooperation. Under an approach similar to the MSP, countries could develop and promote a cooperative mindset while maintaining their territorial sovereignty.

[5] Only Cambodia has not ratified the UNCLOS. See Status of the U.N. Convention on the Law of the Sea, U.N. Treaty Collection (Jan. 8, 2014), https://treaties.un.org/pages/viewdetailsIII.aspx?&mtdsg_no=XX~6&chapter=21&temp=mtdsg3&lang=en.

[11] See Jill Harrelson, Blackbeard Meets Blackwater: An Analysis of International Conventions that Address Piracy and the Use of Private Security Companies to Protect the Shipping Industry, 25 Am. U. Int’l L. Rev. 283, 292–93 (“[S]tates have jurisdiction over pirates if they are captured on the high seas. In contrast . . . a state has complete sovereignty over its territorial seas.”).

[13] The SUA Convention was initiated after the politically-motivated hijacking of the Italian cruise ship, Achille Lauro, in 1988. Harrelson, supra note 11, at 293. Unfortunately, Article 101 of the UNCLOS did not apply to the hijacking. See Robin Geiss & Anna Petrig, Piracy and Armed Robbery at Sea 62 (2011). Therefore, states found it necessary to create a legally binding instrument that would apply to criminal acts committed at sea for political and other ends. Id.

[19] See Int’l Maritime Org., Status of Multilateral Conventions and Instruments in Respect of Which the International Maritime Organization or its Secretary-General Performs Depositary or Other Functions 418–33 (Jan. 9, 2014), available at http://www.imo.org/about/conventions/statusofconventions/documents/status – 2014 New Version.pdf.

[22] See id.; Int’l Maritime Org., Code of Practice for the Investigation of Crimes of Piracy and Armed Robbery Against Ships 4 (2010).