Through a Drone Darkly, Vol. 1 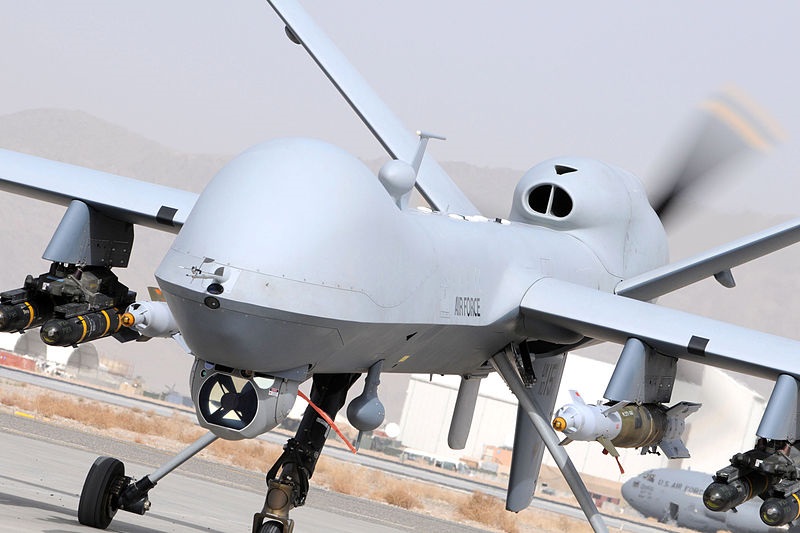 Through a Drone Darkly

One of the delicious ironies of history is that Alfred Nobel will be best remembered for the Peace Prize that bears his name and not for his old reputation, as the inventor of dynamite, of being le marchand de la mort.[1] A kindred irony is that four years after receiving that Peace Prize, President Obama stands at the helm of an administration accused by human rights groups of having violated international law through its use of drone strikes in the relentless War on Terror.[2]

Worse yet, at least three victims of the President’s targeted killings in Yemen have been U.S. citizens.[3] One of the better known victims was Anwar al-Aulaqi,[4] a New Mexico-born cleric with a passion for jihad who had just finished breakfast when the drone came swooping down.[5] His death came after a federal district court in 2010 dismissed a case brought by his father, Nasser al-Aulaqi, contesting the inclusion of Anwar on the President’s kill list.[6] While one might say that at least Anwar al-Aulaqi should have seen it coming, the same could not be said of Anwar’s son, Abdulrahman, who was hardly old enough to drive when he became a drone’s accidental victim the following month.[7]

These and other deaths underlie a growing, nagging skepticism about the legality of the Administration’s targeted killings.[8] However, insofar as their lawfulness has been questioned, White House spokesman Jay Carney has responded that “we would strongly disagree.”[9] In one sense, this clear stance is a noticeable improvement from the almost-bombing of Syria, about which the President only spoke nebulously about the importance of international norms and his “authority” to order missile strikes in the absence of a direct or imminent threat—international norms notwithstanding.[10] In contrast to its view on action in Syria, the Administration has unambiguously said that drone strikes, even with civilians as unwitting victims, “are in accordance with all applicable law.”[11] However, while Administration’s stance is clear, what remains to be answered is how these strikes can be legal when the Administration is answerable to no one.

The laws that are applicable to drones are complex and contested. Generally, targeted killings are permissible for all enemy combatants in an armed conflict, governed by international humanitarian law.[12] Outside of an armed conflict, they may be used when necessary to thwart an imminent threat, under the less permissive paradigm of international human rights law.[13] To cover all its bases, the Administration has invoked both rationales. First it has argued that targeted killings occur in the context of the armed conflict that was congressionally recognized by the post-9/11 Authorization for the Use of Military Force. [14] Alternatively, the Administration has argued that the killings are supported by other legal bases under U.S. and international law, including an “inherent right to national self-defense.”[15]

The Al-Aulaqi affair has brought to the surface some of the unflattering tensions underlying U.S. practice. Following the deaths of his son and grandson, Nasser al-Aulaqi again filed suit, alleging that the killings violated the targets’ rights under the Fourth and Fifth Amendments as well as the Constitution’s Bill of Attainder Clause.[16] The Administration countered by asserting that the validity of the killings was a nonjusticiable political question, one of the same grounds on which Nasser’s previous case was dismissed.[17]

To put it differently, the Administration argued that the question of whether the executive acted lawfully in killing Anwar al-Aulaqi—e.g., whether he was targetable as an enemy combatant within an armed conflict, despite being “outside of any active hostilities”[18]—should be left to the executive. To make the Administration’s reasoning more palatable, Brian Hauck, counsel for the defendants, offered the assurance that “there’s an extensive executive review process,” in making these types of decisions.[19] However, the Honorable Rosemary Collyer was less than impressed, noting that “[t]he executive is not an effective check on the executive . . . .”[20]

Of course, it would be uncontroversial to say that a lawful enemy combatant is liable to die. Nor, in this author’s opinion, should the commander-in-chief be constrained in determining whom, among combatants, to kill. However, to grant to a single branch an unreviewable right to resolve the scope of lawful warfare—and who fits rightly in that scope—is another beast entirely.

One thinks back to the Prize Cases, which deemed Confederates subject to the laws of war.[21] Consider what innumerable problems would have come if the Union had to, at every turn, trouble itself with its enemies’ due process.  Still, the Supreme Court took it upon itself to determine (1) whether Confederates were subject, in the first place, to the laws of war,[22] and (2) whether the Union’s actions, vis-à-vis its enemies, complied with those laws.[23]  It remained, in the words of John Dehn, incumbent on the courts to “ensure that those exceptional circumstances [of armed conflict] actually exist and are not being opportunistically asserted by an overzealous executive.”[24]

The most startling thing in the first al-Aulaqi case was the near complete abdication of judicial power to second-guess the President’s judgment of his own legal compliance. There ought to be something immediately unsavory to the American palate about a self-checking executive. Indeed, it goes against our very notion of separate and balanced powers.[25]

What we have is a self-regarding Presidency that will extend, with sheer impunity, the logic of its war however it sees fit. And if, outside of an armed conflict, the determination of an “imminent threat” is a political question, it would seem a court could never meddle in the President’s ipse dixit aims. It is no wonder, then, that the Administration can insist upon its operations’ legality: it is its own arbiter, after all.

The foregoing is not to say targeted killing is not without its merits. It bears noting that the likes of Anwar al-Aulaqi inspire little sympathy. His life bore witness to the fact that one might rise from a meager YouTube propagandist to a full-blown terrorist plotter.[26] He even went as far as to declare Nidal Malik Hasan, the shooter responsible for the deaths of thirteen Americans at Fort Hood in 2009, a hero and a “man of conscience.”[27] Thus, while the means chosen to end his life was legally problematic, civilization is likely still better off without him. Moreover, legal or not, drones are effective and likely safer than their manned alternative.

However, the evil of our opponents and efficacy of our weapons are not enough. “To say a military tactic is legal, or even effective,” the President has remarked, “is not to say it is wise or moral in every instance.”[28] While the President’s words are unimpeachable, they also reveal the problem with the Administration’s current reasoning: when the executive chooses when drone strikes are legal, the American people are left with only what the Administration believes is wise or moral. This situation is fundamentally at odds with America’s constitutional structure, which rejects the self-checking executive.

[1] This is French for “the merchant of death,” as he was called in a premature obituary.  See Alfred Bernhard Nobel, Encyclopædia Britannica, http://www.britannica.com/EBchecked/topic/416842/Alfred-Bernhard-Nobel (last updated Mar. 19, 2012).

[2] See Human Rights Watch, Between a Drone and Al-Qaeda: The Civilian Cost of U.S. Targeted Killings in Yemen (2013); Amnesty International, Will I Be Next?: U.S. Drone Strikes in Pakistan (2013).

[10] See Barack Obama, Remarks by the President in Address to the Nation on Syria (Sep. 10, 2013) (transcript available at http://www.whitehouse.gov/the-press-office/2013/09/10/remarks-president-address-nation-syria).

[21] See The Prize Cases, 67 U.S. 635, 674 (1862) (“All persons residing within this territory whose property may be used to increase the revenues of the hostile power are, in this contest, liable to be treated as enemies, though not foreigners. They have cast off their allegiance and made war on their Government, and are none the less enemies because they are traitors.”).

[25] Of course, administrative self-supervision is not unheard of altogether. France, for example, has something of the sort. The Counseil d’État serves both an advisory and an adjudicating role vis-à-vis the executive. But herein lies another irony:  the solipsistic hawkishness of the Administration makes them seem, of all things, French.

[28] Barack Obama, Remarks by the President at the National Defense University (May 23, 2013) (transcript available at http://www.whitehouse.gov/the-press-office/2013/05/23/remarks-president-national-defense-university).