The Philippines: Politics of Disaster 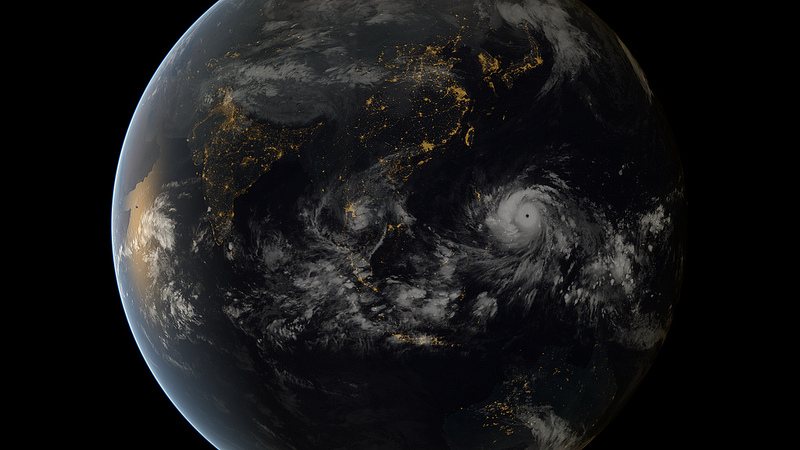 Politics of Disaster: Statecraft in the Aftermath of Typhoon Haiyan

Laws regulating international disaster relief are scarce, and while many recommendations exist, the immediacy of a crisis makes discarding frameworks in favor of fluidity a tempting option.[1] The U.N.’s efforts towards establishing a framework in this area have been largely symbolic: In 2008, the General Assembly passed a resolution urging member states to put into place more effective disaster relief laws. [2] Other agencies have taken more concrete steps. For example, the International Federation of Red Cross and Red Crescent Societies (IFRC) has written the International Disaster Response Law (IDRL) Guidelines, a set of principles to guide disaster-response legislation, and drafted a model act for the regulation of international disaster relief.[3] However, even the IFRC’s Guidelines and model legislation do not mean that all the countries who need disaster response legislation have taken the necessary measures. Indeed, only fourteen countries have adopted laws or rules based on the IFRC’s Guidelines.[4]

Why is this important? The absence of a legal framework for disaster response can mean that relief efforts make feel-good headlines, but have less impact because of legal snares and a cascade of other problems. Also, in strategically significant countries, disaster response can become a stage for the politics of other nations, masked by altruistic intentions. For example, responding to Typhoon Haiyan’s destruction in the Philippines gave the United States and China a new opportunity to push forward their foreign policy agendas. Without concrete disaster response laws, nations are free to pursue their political strategies under the guise of relief efforts.

Disaster Relief Should be Effective

Three key issues arise when responding to disasters in countries with insufficient legal frameworks: “barriers to entry; legal facilities for operation; and . . . quality and accountability issues.”[5] Barriers to entry can bottleneck incoming relief workers and supplies through visa and custom regulations.[6] Also, while international organizations such as the IFCR and the U.N. may have longstanding agreements with many countries, smaller outfits often find it difficult to establish a legal personality upon arrival.[7] These organizations are faced with two undesirable options: operate illegally or not at all. Lastly, oversight of incoming aid is often uncontrolled, which can lead to inefficient, or even wasteful distribution.[8]

In her 2011 article analyzing recent IDRL developments, Elyse Mosquini looks at the IFRC’s Guidelines as a solution.[9] The Guidelines, which target these three issues, set procedures for formally requesting and accepting international aid. As part of this process, the affected state takes on the role of directing aid.[10] All those providing assistance must accept this control as part of their relief efforts.[11] In particular, the affected state creates specific legal facilities for entry and operation, with provisions for speedy customs approval and grants of temporary legal status.[12] Since the burden of directing recovery in the wake of a disaster can be overwhelming, disaster response law seeks to preemptively set up a framework to allocate international aid, instead of relying on an ad hoc response formed in the disaster’s wake.

However, whether this approach is entirely effective is unclear. The ASEAN 2009 Agreement on Disaster Management and Emergency Response extended an IDRL-Guidelines-inspired framework to all member states,[13] and the Philippines passed laws paralleling the Guidelines.[14] Despite the treaty and domestic Filipino statutes, the disaster response in the Philippines has suffered from some serious shortcomings. The U.N. Office for the Coordination of Humanitarian Affairs has noted that entry difficulties and inefficient distribution have plagued the recovery.[15] The flood of supplies has overwhelmed the airport in Tacloban, one of the region’s hardest hit cities, and distribution has slowed as a result of the congestion.[16] Additionally, medical care has been uncoordinated.[17] Medical teams have focused entirely on short-term trauma-injury recovery, and the battered Filipino health care system will likely be unable to handle medical care once foreign doctors leave.[18]

Of course, all of these problems could be rooted in the severity of the Filipino disaster. Moreover, these problems could have been worse had the 2009 ASEAN Agreement and the domestic legislation not been adopted. However, the issues in the Philippines show that the IFCR’s guidelines are not a panacea and that there is likely room for improvement in the country’s disaster response policy.

Disaster Relief Should be Apolitical

In addition to statutory suggestions for response management, the IFCR Guidelines impose on assisting nations the responsibility of providing aid without the intent of furthering a political agenda.[19] This provision potentially nettles assisting nations who want to pursue their strategic goals through disaster response. The divergent responses of the United States and China to Typhoon Haiyan serve as examples of this type of opportunistic aid. For the U.S., the disaster was a chance to demonstrate the substance behind its rhetoric of the strategic pivot towards Asia.[20] The response was an opportunity to put on a show of impressive military force (important for the U.S., given China’s recent territorial claims) and to improve relations with the Philippines in hopes of securing a greater military presence in the country.[21] China, on the other hand, seemingly used Haiyan as an opportunity to express its displeasure with the Philippines’ recent regional politicking. The Philippines has dragged China into court for its nine-dash line in the South China Sea.[22] China’s paltry response to Haiyan—repeatedly noted as less than Swedish furniture maker IKEA’s donation[23]—has been read as retaliation.[24]

If the IFCR’s guidelines were binding, this political posturing would be less prevalent, not only because of the Guidelines’ outright prohibitions on such machinations, but also because gaps in disaster response regulation allow nations to inject their assistance with foreign policy undertones even if it is not needed. A centralized domestic management group could easily send back (or never even request the aid of) the entire U.S. Carrier Group floating in the Philippine Sea, if it was not necessary. A domestic management group could also reject the late arrival of China’s medical ship, Peace Ark, for the same reason.[25]

Furthermore, centralized accountability could prevent the “survival of the fittest” scrambles over airdropped food that the U.S. has been criticized for.[26] The IFCR Guidelines ask that special attention be paid to “particularly vulnerable groups,” which include children, the elderly, and persons with disabilities.[27] The airdropping of supplies, brought about in part by the U.S.’s reliance on its naval aviation assets, ignores these groups. Imposing laws derived from the IFCR Guidelines would work to curtail this practice and would, by extension, lessen the U.S.’s ability to put soft power assets to work.

Unfortunately, the IDRL Guidelines could not address China’s response as well as they could curtail American muscle flexing. Prohibiting relief efforts as politically motivated because they are too small would be highly problematic. However, a combination of the provisions demanding aid be given based on the assisting nation’s organizing abilities and requiring political neutrality could create more moral pressure on China to increase its grants. Section 4(3)(g) of the Guidelines states that an assisting nation’s response should be “[c]ommensurate with their organizational abilities.”[28] The provision’s purpose, described in the Guidelines annotations, is primarily to prevent overeager aid providers from promising grand assistance and then failing to deliver because their infrastructure cannot match their enthusiasm.[29] However, the provision could also be read in the context of a prosperous nation as demanding a response commensurate with their organizational abilities. Here, the IDRL framework would set the norms for expected minimum contributions, increasing the amount of aid expected from prosperous nations.

The Downside to Depoliticizing

Of course, any effort to depoliticize relief efforts might also have a negative impact on the amount of aid received. Some countries may not want to give as much assistance (or give at all) if their aid cannot be used to further a strategic agenda. This is a serious problem, as it is seldom the case that disaster victims have an overabundance of assistance. Thus, politically neutral assistance may not be worth it, if it comes at the cost of unnecessary human suffering.

Moreover, even if a country believes politically neutral assistance is worth the cost, determining the motivation for a particular relief effort could be dubious. For example, airdropping supplies could be an opportunity to show off air superiority, but it may also be the most effective way of getting supplies to remote areas that are difficult to reach by ground. Having a central authority to arbitrarily decide whether such an effort is improperly motivated risks frustrating relief efforts and deterring outsiders from coming forward to assist in the first place.

Lastly, the IDRL framework, as embodied in national legislation, would be unable to regulate the selective provision of aid as a political tool. Even if all countries adopted the IDRL framework and all providers of aid abided by it, countries could still selectively choose which countries to provide aid to and how generous to be. This, by itself, could be used to further political or strategic agendas. While section 4(3)(g) could set norms for contributions, these benchmarks would not be mandatory, meaning aid providers could choose where and how much to donate, depending on where their strategic interests lie.

Without binding disaster relief laws, providing assistance to an affected area can be chaotic, meaning a less effective response and more human suffering than necessary. Further, tragedies like Typhoon Haiyan can be an opportunity for nations to further their foreign policy objectives under a veneer of beneficence. As norms and background principles, the IFCR’s attempt to improve disaster response gives great guidance for domestic legislation. However, the IFCR’s efforts do not go far enough. A concrete, binding IDRL framework is needed through an international agreement. Such a framework would make disaster response more organized and, hopefully, more effective.

Further, such a framework would have the potential to depoliticize the provision of disaster assistance in strategically significant locations, like the Philippines. Implementing this apolitical ideal, though, carries with it the risk of countries offering much less aid. Any mandatory IDRL framework would need to address this risk. This could be done by establishing pre-determined amounts of aid to be offered by countries, based on the resources they have available. While this type of arrangement would put countries in the awkward position of being bound by charity, it would also ensure that countries in need received the necessary amount of aid without being subjected to the political or strategic agendas of donor countries. The underlying issue is a clash of idealism and practicality: do self-interested ends taint relief efforts to an unpalatable degree, or do the benefits of aid absolve the giver of attendant political machinations?

[14] Int’l Fed. of Red Cross & Red Crescent Soc, Progress in the Implementation of the Guidelines for the Domestic Facilitation and Regulation of International Disaster Relief and Initial Recovery Assistance, at 5, IFCR Doc. 31IC/11/5.5.1 (Oct. 2011), available at http://www.icrc.org/eng/assets/files/red-cross-crescent-movement/31st-international-conference/31-int-conference-idrl-rep-11-5-5-1-en.pdf.