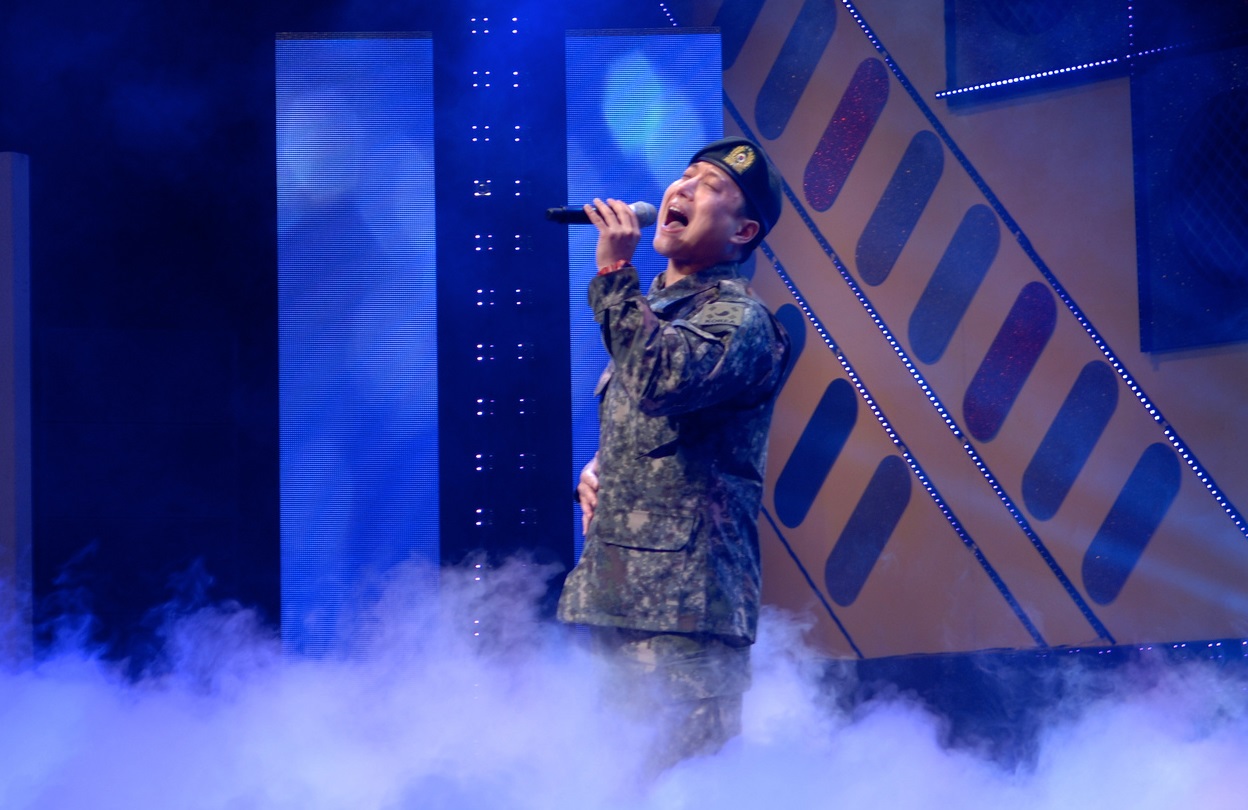 South Korean pop music, known internationally by the moniker “K-Pop,” has an active and widespread fan culture. The devoted fans of K-Pop groups—at the time of this article, examples include all-male singing group SHINee, female group Girl’s Generation, et cetera—follow the news of their idols’ lives to make sure the beloved entertainers are kept healthy, wealthy, and relevant. For all-male groups, one matter that is of particular importance to fans is members’ military service.[1] Why? South Korea maintains a system of mandatory military service[2] due to the ongoing tension between the North and South Koreas.[3] The law requires all males aged between 18 and 35, idols or otherwise, to serve in the military for between twenty-four and twenty-eight months.[4] For a celebrity at the peak of his career in the entertainment industry, being drafted into military service comes as a great upset to the fans.[5]

Male idols, however, have little choice. Military service,[6] along with taxes,[7] education,[8] and labor,[9] is listed as a Constitutional Duty for all male citizens.[10] The exemptions to compulsory service—physical strength inadequacies and disabilities being the most common—are limited.[11] Moreover, there is also a great deal of societal pressure to enlist, as military service is seen as a rite of passage for young men.[12]

However, one’s professional career is only one of many reasons why South Korean males may wish to avoid serving. Some may be disinclined to take time off from their education[13] or to put strains on social relationships.[14] Others may simply not want to enter such a physically and emotionally challenging environment. In addition, those who serve in the military are paid below the Korean minimum wage,[15] which makes military service even less appealing.

Perhaps most importantly, some Korean men object to service on moral grounds. This legal argument—that of conscientious objection, or the refusal to participate in military service based on an individual’s conscience or profound conviction against any war or a particular war[16]—has surfaced several times in the past. However, the South Korean Supreme Court has denied such claims.[17] In South Korea, where military service is compulsory, conscientious objection is criminalized and criticized as “unpatriotic.”[18] Objectors are sentenced to prison for eighteen months, with the law allowing them maximum sentences of thirty-six months.[19] Each year, hundreds of conscientious objectors are imprisoned[20] and prohibited from getting a job in any state agency, local autonomous entity, or public organization.[21] They are also deprived of their licenses and official business permits.[22] As a result of their non-service, objectors may also face difficulties finding jobs in the private sector, as Korean employers take into consideration the individual’s participation in the military service.[23] For these reasons, dodging the draft, as one commentator put it, has become “something of an art,” with some men going to “extraordinary lengths” to escape service while not breaking the law.[24] One example is getting large tattoos before the physical examination which, under the Korean conscription law, makes men unfit for the military.[25]

Draft dodging in K-Pop culture and the controversies around it can be traced back to Steve Seungjun Yoo, a Korean-American pop artist who was at the height of his career in the late 1990s and 2000s.[26] Just before he was inducted, the singer became a naturalized U.S. citizen.[27] As a result, the South Korean government deported him and permanently banned him from the country, effectively ending his career.[28] Since then, the South Korean public has taken how celebrities respond to military service very seriously, believing there should be no “special treatment or exemption” for anyone.[29] Korean pop singer and rapper Psy, for example, was criticized for neglecting his duties while he worked at a software firm as an alternative to serving in the military.[30] The K-Pop star had taken advantage of one of the narrower exemptions for those with technical expertise working in companies that serve vital national interests.[31]

Given the harshness of the current system and the lengths men are going to avoid service, perhaps South Korea should consider reform. One option, which the five concurring Justices in the South Korean Supreme proposed in a 2004 decision, is for the government to provide greater opportunities for alternative service for conscientious objectors.[32] Admittedly, however, such a system could be open to abuse.[33] Another option would be to switch to a voluntary military service system that meets South Korea’s need for an active military by providing more incentives to participate. There may be, at least initially, enough societal pressure to serve; military service has become such a rite of passage for young men in South Korea[34] that many men will likely serve without legislation requiring it. Further, potential shortfalls in recruitment could be mitigated with better pay and benefits to incentivize enlisting. Of course, such a change would put a significant financial burden on the South Korean government.

With widespread and increasingly creative attempts at draft dodging—and understandable reasons for doing so—the system is clearly imperfect. As long as tension exists between the two Koreas, however, South Korea will need to maintain an active military. And the country is unlikely to do so at its current low cost without mandating participation. Despite the dodging attempts, the general public in South Korea understands this, and so do the idols: as one pop culture columnist put it, “nowadays entertainers feel it’s better to get [military service] over and done with” than try to avoid it.[35] Unless South Korea can find the perfect balance between finances and its need for an active and strong military (or until the tension between the two Koreas ends) able-bodied Korean males will need to report for duty, whether their millions of fans worldwide like it or not.

[11] Supreme Court, 2004Do2965, July 15, 2004 (S. Kor.) (“The current Military Service Act provides exemptions for illness, physical disability, and a system of special exceptions exist for public service workers, professional researchers, industrial technical experts while not accommodations are made for those who refuse active duty due to conscientious or religious reasons.”).

[12] See San-Hun Choe, Draft Dodging South Korean Style, CBS News (Feb. 11, 2009), http://www.cbsnews.com/2100-202_162-560228.html. (“Most see military service as a sacred duty of manhood. By law, those seeking top government jobs or running for parliament must reveal not only their own service records but those of their children. ‘In South Korea, you are not a man until you finish your military duty,’ says Chang Myong-ki, 40.”).

[14] See, e.g., id. (“Moon discussed the additional social pitfalls of becoming disconnected with your social community at Stanford that results from serving during undergraduate years. ‘If I go after this year, then all of my friends will have graduated before I come back,’ Moon said. ‘The pro of going after college is, of course, that your social life isn’t as affected.’”).

[23] Narae Kim, Jail, Stigma Await South Korean Men Who Refuse Military Service, Reuters (Aug. 28, 2013), http://www.reuters.com/article/2013/08/28/us-korea-army-conscience-idUSBRE97R07N20130828. (“Im’s brother Bosuk, 32, also ended up working at their father’s company. He believes his criminal record and the stigma of his refusal to do military service barred him from getting a job at a firm he wanted . . . South Korean men who want to work for major companies must provide their status of military service in the application.”).

[24] Steve Finch, After Tensions with North, South Korea Ponders Its 63-Year-Old Draft, Time World (June 7, 2011), http://content.time.com/time/world/article/0,8599,2076144,00.html. (“Meanwhile, dodging the draft has become something of an art. Conscientious objectors and the rich and famous have gone to extraordinary lengths to escape the draft, an act which carries a minimum 18 months in prison. Some have opted for last-minute full-body tattoos that disqualify them for service; others have lost extreme amounts of weight to fail the medical exam, faked personal records or even changed their nationality.”).

[33] See Cho, supra note 22, at 197 (“[T]he general public does not seem to be as friendly to the conscientious objectors. They fear that conscientious objection may be used as a plausible excuse to evade the twenty-six month mandatory military service, and many see alternative service for the objectors as too lenient.”).

[35] Park, supra note 31 (“’The mood against draft-dodgers and negligence of duty is so hostile that nowadays entertainers feel it’s better to get it over and done with,’ says Ha Jae-geun, a pop culture columnist.”).