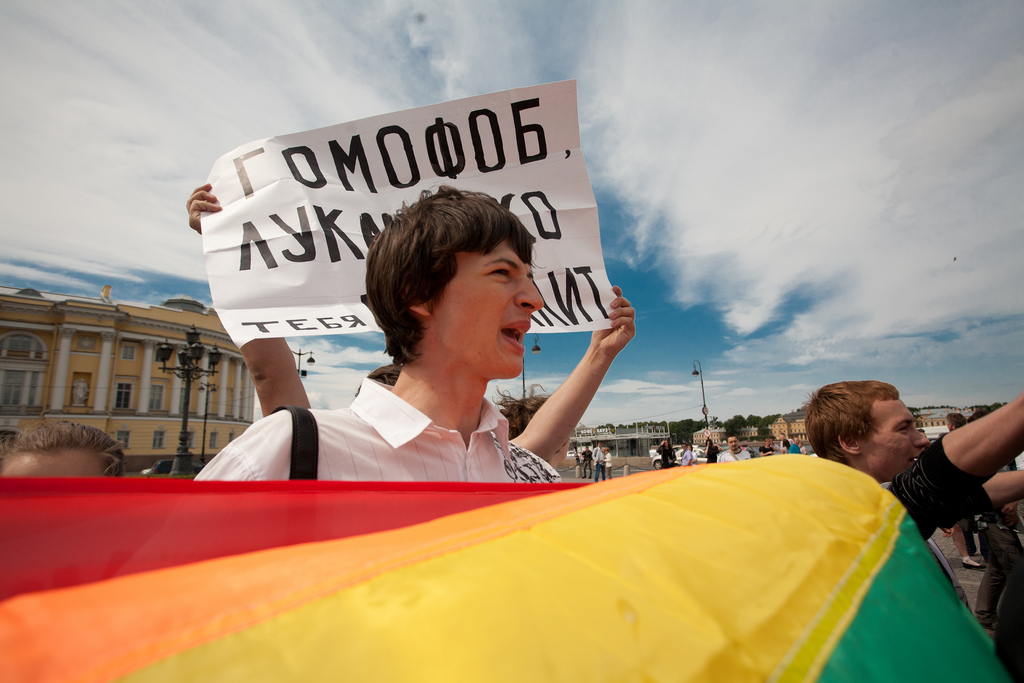 On June 30, 2013, Russian President Vladimir Putin signed into law[1] a bill that bans the spreading of “propaganda of non-traditional sexual relations to minors” and the distribution of information that promotes the “distorted conception of the equivalence between traditional and non-traditional sexual relationships,” setting fines as high as one million rubles, or 30,200 U.S. dollars.[2] The law, criticized for its vague language,[3] means that one cannot publicly say anything positive about same-sex relationships.[4]

While the original author of Russia’s anti-gay legislation, Vitaly Milonov, insists “nothing has changed for gay society” since the law was adopted,[5] the law has had far reaching effects. Children of gay parents in Russia feel that they should hide their ties to their own parents since, under this new legislation, gay parents are technically breaking the law by propagating their relationship to their children.[6] Also, some individuals have reported facing constant threats for being gay since the law was implemented.[7]

Welcome to the 2014 Winter Olympic Games in Sochi, Russia

Reaching farther and of relevance to this article is how the new legislation affects foreigners in Russia. The Russian police, in less than a month after the law’s adoption, arrested foreign tourists for reportedly asking a seventeen-year- old, who had told the visitors that he was eighteen, about gay rights.[8] With Sochi, Russia selected as the host of the 2014 Winter Olympic Games, members of the lesbian, gay, bisexual, and transgender (LGBT) community and their supporters have voiced concerns that gay athletes and spectators may face discrimination during the Games.[9]

It appears the law will stay in place during the Olympics and that athletes and spectators visiting Russia will not be immune from prosecution.[10] Russia has argued that its law is in keeping with the Olympic Charter’s protections against discrimination, and the International Olympic Committee (IOC) has accepted Russia’s view.[11] The IOC released a statement on August 22, 2013, saying that it had received “strong written reassurances from the Russian government that everyone will be welcome at the Games in Sochi regardless of their sexual orientation.”[12] However, this fails to address the main concern, which is not that gay athletes and spectators will not be allowed to participate, but that they may face prosecution depending on what the Russian government sees as “propaganda.” The IOC nevertheless declared on September 26th that its officials were “fully satisfied” that the law does not violate the charter’s anti-discrimination guarantee.[13] An Interior Ministry statement from Russia demonstrates the IOC’s position well by focusing on the fact that the law does not technically make it illegal for one to be gay: “The law enforcement agencies can have no qualms with people who harbor a nontraditional sexual orientation and do not commit such acts [to promote homosexuality to minors], do not conduct any kind of provocation and take part in the Olympics peacefully.”[14] However, this wholly ignores the actual effects the law has had thus far.

Is a Boycott the Appropriate Response?

While the law will have an undoubtedly negative impact on LGBT athletes and foreign spectators, there is disagreement on whether a boycott of the 2014 Winter Olympic Games would be effective or even desired. Actor and playwright Harvey Fierstein has argued that a boycott would pressure the Russian government to reconsider the law; Fierstein says that the Olympic Committee must demand the retraction of the new law under threat of boycott.[15] On the other side, there are concerns that a boycott may not only be ineffective but also could worsen the situation for gay individuals in Russia. Resistance from the liberal West could help Putin in portraying himself as the defender of the traditional Russian family.[16]

Some also feel that active participation in the 2014 Olympics would further LGBT activists’ goals, arguing that exposing Russians to more gay people would “prove that [gay people are] just regular people” and even “extraordinary athletes,” should some gay athletes win medals in the Games.[17] U.S. President Barack Obama has echoed this idea, saying, “One of the things I’m really looking forward to is maybe some gay and lesbian athletes bringing home the gold or silver or bronze, which I think would go a long way in rejecting the kind of attitudes that we’re seeing there.”[18]

The Problem with “Propaganda”

Whether for or against the boycott, the problem with the law lies with its failure to define “propaganda,” since mere declarations of love could result in prosecution.[19] While Putin has defended the law, saying it protects children and does not infringe on the rights of gays,[20] Russian gay rights activists say that the law has given society permission to discriminate. The law has already effectively outlawed any manifestations of gay pride in public because there is a chance that children might see them. Gay rights advocates say that the law is vague and can be used to arrest anyone who appears to support gay rights,[21] and how far the Russian government will go in deciding what appears to support gay rights is unclear.

Although the Russian government has attempted to qualify its law by emphasizing that it only makes the spreading of gay propaganda illegal, failing to define “propaganda” opens the door to prosecution of a broader demographic of people than what Russia appears to have convinced IOC. How broadly and aggressively, if at all, the Russian government will apply the anti-gay propaganda law to foreign visitors is yet another issue, beyond the medals and scandals, to anticipate for the 2014 Winter Olympics.

[1] See Kodeks Rossiiskoi Federatsii RF ob Administrativnykh Pravonarusheniiakh [Russian Federation Code of Administrative Violations] art. 6.21 (Russ.). For an unofficial translation of one of the drafts of the bill, see On Introducing Amendments to the Code of Administrative Offences of the Russian Federation, Russian LGBT Network, http://lgbtnet.ru/sites/default/files/russian_federal_draft_law_on_propaganda_of_non-traditional_sexual_relations_2d_reading_eng.pdf (last visited Oct. 14, 2013).

[6] See Ustinova, supra note 2 (“‘Technically, my mothers are breaking the law by propagating their relationship to me’ Kochetkova [a Russian teen] said in a telephone interview. ‘It’s sad and incredibly unfair.’”).

[7] Id. (“Semenova, who heads the parents network at Coming Out, a nonprofit in St. Petersburg, . . . said she feels more like a minority every day. ‘We face a constant threat on the streets, at school,’ she said. ‘That law has changed a lot in our life’”.).